Laughter, wit through three decades Beloved teacher, coach leaves after 30 years A canoe drifts through a stretch of lake in the boundary waters, gliding past a shoreline of dense trees that are reflected on the surface of the water. The water is full of native birds that flock together. …

Three Minnehaha alumnae are currently studying abroad in France. They learned French together at MA and parted ways at graduation, yet all ended up in France just a few years later It all started in room 240. “[Mr. Norlander] would pass around a sheet every year with names of former … Minnehaha’s new French amity, Laëtitia Lompech, is thrilled to be in Minnesota for a new adventure and to learn to be a teacher. Lompech is from Clerment-Ferrand, France, where she studied English. Someday she wants to be a English teacher in France. She wanted to live in an English speaking … Amity aides bring native speakers to world language classrooms French, Spanish amities reflect on their year in the United States In San Diego, Calif., there is a place called Amity Institute, a company that recruits people who are studying to be teachers in another country. They work with two locations …

A new Chinese teacher and two new amities instruct students in their native languages Minnehaha is able to gain a few new faces By Alex Lindberg and Pauline Ojambo, Talon staff writers Walking down the halls of Minnehaha, students are going to notice some new faces.  The language department has brought … 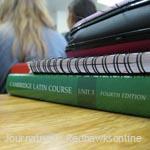 What influences a decision to learn one language instead of another?